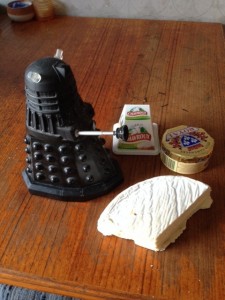 An article on North Korea in this morning’s Guardian refers to Kim Jong-un as “an over-weight 31 year-old with a rumoured weakness for cheese”. Rarely has fromage sounded so sinister!

All over the world readers are doubtless now pondering whether there is a perverse connection between cheese and totalitarianism. Did Mussolini have a penchant for pecorino? Was Hitler partial to a large slice of Brie? Did the Ceaucescus gorge on gorgonzola?

More to the point, can one predict extremist political tendencies based on an over-enthusiasm for cheese? Would British politics have been different if we’d known that Oswald Mosley was a compulsive scoffer of mozzarella?

The implications of this theory are enormous.

Suddenly I see the cosy world of Wallace and Gromit in a far more questionable light.

And just think of the consequences if an investigative journalist could find a large lump of Norwegian Gammalost in Nigel Farage’s larder. His political career would be in tatters overnight!