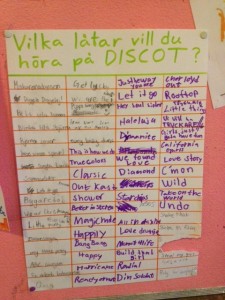 Last Friday I accompanied my son to the kids’ disco at Björkhagen School. It was bursting at the seams with very excited 9, 10 and 11 year olds. How thoroughly delightful, you must be thinking.

Well, it was pretty noisy. Lots of kids frenetically dashing around, jumping up and down and screaming their heads off. A 12 year old DJ was choosing the tracks on Spotify but the sound system was both tiny and tinny. I had to make a big effort to hear which song was playing.

One thing that helped was that the denizens of the disco were singing along heartily with  the songs, 95% of them were in English. They knew all the lyrics and their pronunciation wasn’t at all bad.

One of the mums standing next to me commented on how, back in the day, she and her friends had also sung along to their favourite songs. They hadn’t really understood the lyrics and she was pretty sure that no English speaker would have understood what they were singing either.

Things are so much easier for modern schoolkids.

Want to know what is being sung? Just go to Youtube, write the song’s name and the word lyrics. and invariably there’s a clip where you can read as you listen.

Here’s Adele with Rolling in the deep.

And it’s not just disco songs. You can even find old favourites like Leonard Cohen.

Youtube is a huge treasure chest of language learning treasures just waiting to be explored!